Magento 1 VS Magento 2: Why Should You Migrate? 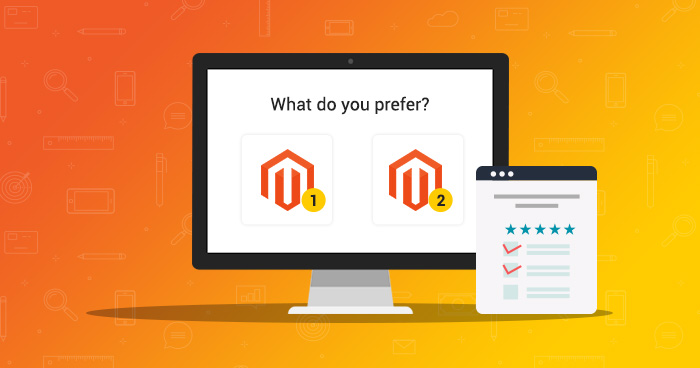 Magento 1 had a good run.

It changed the way developers and store owners see ecommerce platforms. But, Magento 1 End of Life (EOL) is just around the corner. Despite the release of Magento 2 in late 2015, thousands of stores are still on Magento 1.

Given the EOL, I believe it is now essential for Magento 1 store owners to migrate to Magento 2.

Why? Because the technologies and innovations used in Magento 2 make your store performance faster and be more secure and reliable than ever. The migration from M1 to M2 gives your online business the much-needed competitive edge.

Let’s start with a detailed analysis of Magento 1 versus Magento 2.

Magento 1 was built back in 2009 using the technologies of that time. Magento will support Magento 1 through June 2020 and will stop updating and releasing security patches, and fixes after the deadline.

The main issue with Magento 1 was its performance, which is significantly improved in Magento 2. The stack of Magento has changed with the addition of multiple new technologies, such as the support for the newer versions of Apache, NGINX, MySQL, PHP, Composer, Symfony, CLI, and the default support of Varnish, Memcached, and Redis.

Keep in mind that Magento 2 supports the latest PHP version because of better code performance. Also, Magento 2 reduces unnecessary browser operations on the client’s side through minimized JavaScript, as well as default support for RequireJS and KnockoutJS in the core Magento 2 codebase.

Given that Magento 1 will soon stop receiving updates and security patches, you won’t be able to maintain a secure Magento 1 store without paying a prohibitive development cost to create and update custom patches.

On the other hand, if you choose to migrate to Magento 2, your initial investment is likely to be steep. Magento 2 store development will probably cost you more considering the limited number of Magento 2 agencies and experienced developers.

The exact cost of an entire Magento 2 store development is hard to estimate. It is an extremely customizable system with endless development possibilities, making it difficult to give generic estimates. Magento 2 development agencies advise that you look at the cost to build your Magento 1 store and add another 10% to cover the overheads.

Your business growth has significant implications for the performance of your ecommerce store. You can expect to get more traffic and thus need a solution to cope with the increased demands of the visitors. That’s why performance was one of the top reasons for the platform’s transformation.

Magento 2 is faster all around with great frontend performance. When compared to Magento 1, Magento 2 store pages load 30 to 50% faster, and they can handle up to 39% more orders within an hour. Also, Magento 2 can handle 10 million page views within an hour, whereas Magento 1 would stop at two hundred thousand.

Unlike Magento 1’s messy design, the admin panel in Magento 2 is more responsive, user-friendly, and interactive with a simple and modern design. As a result, store owners with little technical exposure can manage their Magento 2 stores efficiently.

Users are greatly concerned about the security of their data and are unlikely to buy from an ecommerce store they don’t trust.

Since the official support for Magento 1 is going to end soon, there WILL be an increase in the volume of attacks that would target vulnerabilities discovered after the release of the last security patch.

On the other hand, Magento 2 has not only improved performance, but it also has robust security and stability. The hashing algorithms (SHA-256) for passwords has been strengthened, and as a result, passwords are now more resilient to the dictionary types of attacks.

Why Aren’t People Migrating to Magento 2?

Magento 2 offers a lot of functionalities and improvements that make it a far better platform than Magento 1. However, many store owners still hesitate to migrate from M1 for various reasons.

Most store owners fear change and don’t want to leave their comfort zone. Furthermore, Magento 2 may offer a lot, but it’s still new and untested by many users. It’s still Magento 1 that currently has the bulk of the resources, themes, extensions, and community support.

Migration is never painless, even when you are migrating between two versions of the same platform. It requires extra work and costs for your business. However, at the same time, it encourages you to make improvements wherever possible.t It’s in your best interests to adopt the Magento 2 platform and migrate to it, sooner rather than later.

We did a survey to find out the opinion of most Magento developers about the differences in both the versions and what should beginners use for starting Magento development. We surveyed more than 50 developers, designers, and project managers about the compatibility, design, and migration issues between Magento 1 VS Magento 2. And, here is a summary of it all.

What Do You Prefer in Terms of Usability for Magento 1 VS Magento 2?

One survey participant said, “There is a steep learning curve between Magento 1 VS Magento 2, but that is true for most content management systems.” He further elaborated that this is because the person will have to start from scratch if he has to make his store in Magento 2 because there is no compatibility between the two platforms.

Which Has Better Performance: Magento 1 VS Magento 2?

Again, Magento 2 was favored by developers over Magento 1. Almost 68 percent of developers said that the performance of Magento 2 is a lot better than in Magento 1 platform as new libraries, better code structure, and the use of React/PWA (Progressive Web Apps) are implemented in this platform. Only 28 percent favored Magento 1 in comparison.

One survey responder said, “Magento developers should now start learning Magento 2 because it will prevail in future.” In fact, the redesigned interface of Magento 2 has allowed it a performance increase of at least 50 percent.

Which One Has Enhanced Security: Magento 1 VS Magento 2?

The majority of the participants were again in favor of Magento 2, 81 percent of people recommended it because of its security, while only 7 percent of developers said that Magento 1 is better in terms of security.

There are several reasons why Magento 2 has the edge. First, it has the React PWA compatibility, something that wasn’t available with Magento 1. Secondly, the majority of the developers who participated in our survey have said that it has a gentle learning curve in comparison with Magento 1.

According to the participant, the reason he prefers Magento 2 over Magento 1 was, “Magento2, unlike Magento 1, is more like a framework than Content Management System (CMS) and is going to be different from Magento 1 soon especially after the React/PWA revolution. We’re talking about two different eras of technologies, meaning ‘the future is coming’!”

Which Is Comparatively Better at Ease of Development: Magento 1 VS Magento 2?

The survey participants had a mix of opinions about the development accessibility of both platforms. The majority of the participants suggested Magento 2, but a fair share of them also acted in favor of Magento 1.

According to one participant, “the initial version of Magento 2 (2.0 and 2.1) has too many bugs, but the latest version is changing that. I think PWA will help Magento 2 become more impactful in the future again.”

What Is Your Recommendation for Magento 1 Store Owners and Developers?

The majority of our survey participants have recommended that the store owners should migrate to Magento 2. But here’s one point to notice that 18.5 percent of participants are still in favor of staying with Magento 1.

The reasons they gave are, “Magento 2 frontend architecture has gone too far in its own architectural idealism which gives a lot of headaches to a developer. Also, there are still too many bugs that make it feel like it’s still in a BETA stage. That’s why they have advised Magento 1 store owners to stay with Magento 1 until the Magento 2 version becomes more stable.”

Another participant said, “Stay with Magento 1 if you have invested a lot and everything runs perfectly for you, Magento 1 is still the king of the ecommerce solutions. But, shop owners who are looking for a platform to set up a new business, I would suggest going directly with Magento 2, just because it’s a better investment for the future.”

Some of the Highlights: Magento 1 VS Magento 2

Where the majority of the survey participants are in favor of Magento 2, some have also highlighted the bugs that still surround its development. The major ones are:

Magento 2.0, 2.1, 2.2, and 2.3 are less compatible with each other. Most of the extensions made for Magento 2.0 won’t work with the latest Magento 2.2 version, and the extension needs to be developed from scratch.

The same is the case with migrating from Magento 1 to Magento 2.

Magento 2 is not compatible with all systems, so you have first to make sure that your system is supported before you install the new version.

As it is a comparatively new version, Magento 2 doesn’t have proper support guides available at this time as compared to Magento 1. This causes problems for developers who are proficient in development with Magento 1 platform.

Magento 1 VS Magento 2: Should You Migrate?

Should you migrate to Magento 2? Yes!

When is the best time to migrate from Magento 1?

Your time is running out as June 2020 approaches. By comparing Magento 1 with Magento 2, you are doing your due diligence, but the reality is that there’s not much time left. Migrate to Magento 2 as soon as possible!

If you want to significantly improve your Magento store performance in the long term, you should invest in Magento 2 ASAP.

Are you thinking long term? You can ensure stability by upgrading to Magento 2, Magento 1 is going to become an outdated platform in a few months due to the lack of official support, version updates and security patches.

Magento 2 brings a whole new playing field for store owners and developers alike. As everyone is trying to stay on top of the ecommerce game, you should too.

If you require any help with planning the next steps for your Magento 1 to Magento 2 migration, check out our detailed guide and get in touch! 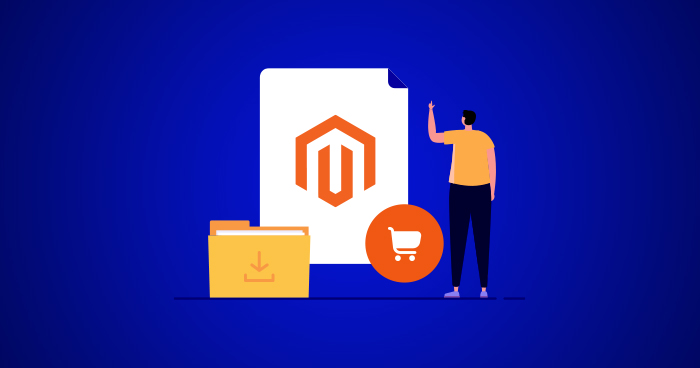 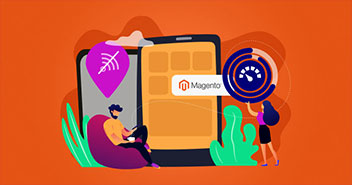 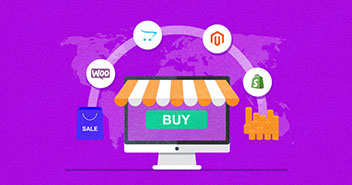