Ben Shares His Experience With WordPress Themes, Plugins and Content 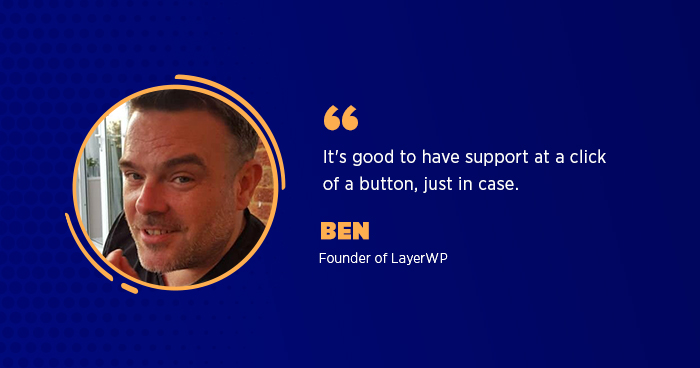 Today in this latest edition of interviews, we have Ben, an avid writer by choice, . He loves creating content about WordPress, whether it’s how-to’s, reviews, or general opinion.

So, let’s get to Ben and ask him a few interesting questions.

Cloudways: Hello Ben, thank you for taking the time out for this interview. Please share your story? What inspired you initially?

Ben: Hey there, I’m not known! Thanks for saying that, I’m simply a WordPress user, neither developer nor theme designer. I have a passion for WordPress and like to share my findings with others.

I studied Art & Design at college, as it was the one thing I was pretty good at. That floundered, and I never really did anything with the qualification. I even wanted to be a film director at one point and started to study Media Studies; sadly, I dropped out.

I’ve stumbled through life, I’ve been a garbage collector, a factory worker, a cleaner, nothing I ever did job-wise, filled the void. I’ll be honest; I was lost.

Eventually, I got a sales job. I was pretty good and coasted doing various sales roles for a few years.

I ended up working for a company that specialized in selling communications equipment. It was there I got speaking to a colleague who was learning web design. Intrigued, I started finding out more.

I looked into the possibility of selling our communications equipment to consumers (we were only selling to trade), more margin by direct selling, more growth opportunities.

I spoke to the Managing Director and explained that I could potentially build a website selling to end-users and the trade. He couldn’t be any more disinterested if he tried!

That said, he did give me a budget and said do it.

It was an idea at that stage, and I had no real clear plan of how the hell I was going to build the site!

Eventually (through research), I settled on an open-source eCommerce solution called OpenCart. I read through every forum I could and learned about web hosting to get things set up and start building the site.

Uptake was slow at first upon launching, resellers (trade customers) liked the site, mainly because it opened their eyes to other products they could sell on, products they never knew existed. This was down to the fact the company was using print brochures.

Resellers were getting these already from various suppliers, and they were swiftly filed under B (the bin).

Slowly consumers started coming to the site and purchasing products. The margins made were considerably higher than selling to the trade. Consumers trusted buying directly from the manufacturer.

I took a step back.

I made this happen, my idea, my work. It made money, money using the internet. Eventually, I moved more into a website administration/marketing role, updating products on the eCommerce site, outreach to trade, and consumers.

I discovered WordPress as a way to update the main company website (a separate entity), at the time it was built using Microsoft FrontPage (I know, I know!) so I learned what I could and made the switch to WordPress. Life was so much easier after that.

I branched into the digital marketing side of things, and I’ve been in the industry ever since, over 13 years now.

Ben: I started LayerWP as a way to document things I’ve learned with WordPress and blogging in general. I love reviewing WordPress themes, plugins, and writing tutorials. I do this from a user perspective, and hopefully, fellow users will find it useful.

I’m not a fan of reading nonsense, so I go in-depth, if I spot a fault, I’ll let people know. By the same token, if I find a workaround for an issue, I’ll write it up.

Cloudways: You have been producing WordPress content for a long time. Tell us how you extract topics? What exactly is your writing strategy?

Ben: Not many people know this, but I started writing WordPress content back in 2007/08 on an old blog (now defunct). It performed quite well, and I developed a taste for it. I’ve dipped in and out of blogging ever since.

As LayerWP is a review/tutorial site, I write from the heart, as a user, and give honest accounts of the products I review. I realize I could potentially be writing for someone new to WordPress, so I try not to baffle them with silence.

The product directly influences my writing process. For example, of late, I reviewed a rather excellent plugin called SliceWP.

Through the process, I documented everything the plugin could do; thus, I came up with ideas, from a user perspective.

The review and guides added up to twelve posts and a word count of over 14k. I shared the ideas I came up with, in a real-world usage case.

I do write for other WordPress blogs and have had articles published on WPZOOM (Pavel is fantastic), WP Mayor, TranslatePress, DesignFrame Solutions, CSSIgniter, Elegant MarketPlace, and more. They typically give me a brief, and I’ll pull something together based on their needs.

Cloudways: WordPress has now become the first choice for most of the bloggers and developers. What do you think about the vital role WordPress has played for both of them?

Ben: I can only speak as a blogger, and I’ll be 100% straight with you, my life has changed thanks to WordPress. Dramatically, in fact.

I’ve spoken to some fantastic individuals, all willing to share knowledge and help. WordPress has helped me no end, as I’ve said already, I’m just a user. WP has afforded me the ability to create websites for friends/family, and helped me land writing gigs, to help pay the bills.

In these uncertain times, I’m doing everything I can to learn more about WordPress.

Cloudways: Website speed has been a hot topic among SEOs for years now. What is your take on the issue, and what do you suggest for optimizing a website?

Ben: Website speed is of paramount importance. Why would a search engine list your site on the results page, if your website takes ages to load? Search engines serve users if a user can’t get the information they need quickly, why bother listing a slow site?

There are plenty users can do to speed up their existing website, from appropriately sizing and compressing images, using a plugin for caching, and more.

Now more than ever, speed is of the essence.

Cloudways: WordPress repository has more than 50K plugins for different categories. In fact, some of them stand out in their respective categories. What do you think that makes those plugins to beat the competition? Is there anything common in them?

Ben: This is something I struggle with as an end-user. I’m probably not going to be popular by saying this either.

We all know who the big players are in terms of plugins; I try to look past that. For every plugin with 200k in active installs, some have a smaller amount and get overlooked.

Many blogs harp on about the more popular plugins because they drive affiliate revenue in sales. I get that; bloggers need to earn to help cover the costs of operating.

Many focus on the more prominent plugins, and smaller ones will get left behind (despite being fantastic), due to uptake or marketing of the plugin.

Developers, develop, marketeers, market. There are very few who can do both.

It’s a real shame, that’s why I went to town on the SliceWP plugin, I think it has fantastic potential. I wanted to help Mihai, one of the developers, as best I could.

I can’t code for toffee, so the only thing I can do is give something back via an honest account and hope it helps.

Cloudways: What resources/tutorials/blogs/ebooks you would recommend to freelancers or developers in general?

Ben: I’m always on Twitter; for me, it’s one of the primary sources for links to tutorials. It’s an undulating sea of content and always fresh, that’s why I use it.

I’m probably on Twitter too much in fairness, and I love talking to others, asking questions, answering them, and sharing knowledge.

If it weren’t for Twitter and Michelle Frechette, I wouldn’t be in the position I find myself now, Michelle very kindly requested an interview with me based on a tweet I made last year.

Ever since then, things took off!

Cloudways: In your opinion, what are the benefits of hosting a site on a managed cloud hosting than a conventional shared hosting service?

Ben: Backups, I cannot tell you the number of times (when I first started) I screwed up by not making backups! Security, uptime, and support. I’m learning more and more daily, so less reliant on support now.

It’s good to have support at a click of a button, just in case.

Cloudways: It’s hard to take out time from work, but we all need to relax once in a while :). What do you like to do in your free time?

Ben: I don’t tend to get a lot of free time. I’m always working, whether it’s writing for other blogs or myself. I’ve been told I do too much by several people, so I’m starting to take breaks for my mental health.

I love movies and am a bit of a film buff, so I tend to unwind by watching something on Netflix or Amazon. Bit of a gamer as well, so I’ll jump into Call Of Duty Warzone now and again to release some anger!

Cloudways: Thank you! We will surely meet again. What are your words to end our conversation here and any message or suggestion to the new WordPress users?

Ben: I’m currently working on a new website called WPDeals.email (still in development), which is solely focused on offering deals on WordPress themes, plugins, hosting, and other tools, via email.

Offers/deals will be sent directly to the subscriber’s email, and I’m currently looking for developers and service providers to work with, so please feel free to hit me up via email on [email protected]. I’ve got plenty of work to do still, but I’m hopeful it will work!

I’ll say this, research. I cannot begin to tell you how much time and money I’ve wasted over the years from purchasing poor products, whether it’s a WordPress theme or plugin.

Do your research, read multiple sources when looking for a theme/plugin, draw your conclusions, and never take one source as the finite answer.

Follow me on Twitter, if you have any questions about themes or plugins, as a user, I’ve been around the block, so feel free to ask me if you have questions!

Thanks for having me Cloudways, really appreciate this!

Cloudways: Finally, for our readers, could you please share the picture of your work station?