“Come for the community, stay for the automation,” Bryan Ollendyke Shares His Thoughts About Drupal and the Education Sector 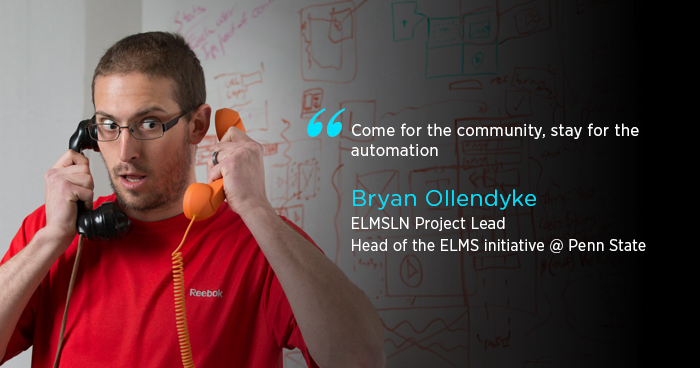 Today we interview a Drupal developer who is transforming the world of education through the use of Drupal. Bryan Ollendyke is the ELMSLN project lead / Head of the ELMS initiative @ Penn State and a leader in DrupalED and Drupal @ Penn State communities.

Cloudways: Hello Bryan, thank you for making time for this interview. Firstly, please tell us a little about yourself.

My name is Bryan Ollendyke or @btopro on drupal.org and Twitter. I’m an educational technology developer at Penn State’s College of Arts & Architecture. I build educational solutions primarily using Drupal and Polymer that meet the needs of learners and educators. I have a BS and MS from Penn State in Information Sciences & Technology and like to write about the philosophy of technology design and societal impact of technology applications.

I am the founder and project lead of a Drupal-based platform (why we do what we do) called ELMS: Learning Network. ELMS:LN is like a multi-site factory under the hood, heavily leveraging Drupal and Drush to create a unique system architecture by which a course experience for students may be delivered by multiple Drupal sites at once. If that sounded complicated, well, it is. So I’ve spent the last four years of my career envisioning what that would look like, how it would work, and building a community around it and getting adopters.

I also play hockey in what I like to call “not working on ELMS:LN” time as @elmsln consumes my life outside of family and friends.

Cloudways: How did you first come across Drupal?

I first got started with Drupal 4.6 in 2005 when I was asked to get a list of usernames imported into a Drupal site so they could use the list to restrict what people could see material for a course experience. I didn’t pick it, it picked me from there and I’ve been an active contributor of Drupal ever since.

Cloudways: What was it about Drupal that has interested you enough to work with it for so long?

I always felt at home at DrupalCon and Drupal camps. The community atmosphere and the sense that everyone is just an average person sharing things which make them feel extraordinary.

I am also in a unique position/career situation where I have a lot of autonomy in what I do and how I do it. So, not only do I get to contribute towards Drupal and other open source communities, I also get to pick the way I go about doing things. This has led to over 100 module contributions on drupal.org as well as install profiles, drush utilities, and more. Currently, I’d estimate that 99.5% of all of my developer efforts are to be used by others in the Drupal, Polymer, and ELMS:LN adopter communities. I don’t think I could get that freedom to transform anywhere else and so 12 years in and I still remain a voice for education in this community.

Cloudways: How much do you think Drupal has to contribute to the education sector?

It’s a bit of a given now for a lot of technology projects in higher education that they’ll be done in Drupal. Prior to Drupal making in-roads in education, there was a wild west of (poor) vendor CMSs both at PSU and beyond. Drupal has saved education, and student loans by-proxy, countless millions over the years. Any time we don’t have to pay for software and instead pay people (who would have been employed anyways) to build sites is money better spent than it once was.

Cloudways: You’re quite involved in the education section as well as Drupal? What would you say made you interested in bringing the two together?

Education is dominated by a handful of Learning Management System (LMS) providers. These organizations (really there’s like three options) have a dominant market position on the technology that teachers use to bridge education. While I love my colleagues and our industry, it seems to be too hard for these providers to shape the minds of tomorrow. So I looked at our space, I looked at the open options, and I decided to avoid all of them.

Moodle is probably the most obvious choice. People often refer to the PHP based Open Source option and ask me why I don’t use it. Well, my answer is simple: These options are build by educators! And the fact that it was built by educators is not something bad or wrong, it’s just never going to reach the architectural superiority of Drupal.

I want crazy smart people building my caching methodologies, not hacker-teachers and a small sector of companies trying to sell shiny things. Drupal provided me the ability to go to instructors, instructional designers and ultimately students and have conversations involving options: “What do you need to have,” as opposed to suggestions: “here’s what you can have.”

Drupal also gets me out of the education island which is far smaller compared to the scope and reach of the larger open source world. Selling this mindset is pretty easy when you can say that the White House security analysts have reviewed the core piece of your platform.

Cloudways: What advice would you like to give to the newcomers on Drupal?

Come for the community, stay for the automation. Drupal’s difficult to master, but once you have a workflow down, you can do the most complex of things with relative ease. In my 12 years in this space, there still isn’t anything that can touch Drupal’s Cache API, Entity API, and Views combo. It can be hard at times but asking the community and reading blog posts and videos can break down those perceived barriers.

Cloudways: How do you see the future of Drupal? Will it be able to carve a niche for itself in the CMS competition?

I see almost two Drupal communities in the same space right now. There’s the Drupal 8 community with enterprise, high availability, big team, big client name community and then there’s the indie-hacker Drupal community. The latter dabbles in Drupal 8 but still spends most of the time on Drupal 7; they may also play with Backdrop and are excited when they check out newcomer competitions like GravCMS. I think Drupal can be great in each realm.

One of the biggest issues I think D8/community as a whole have failed to address is that Drupal 7 isn’t going away for a long time. It’s the dirty secret no one wants to admit, but if you’ve got a good install profile or built a routine with Drupal 7 there’s very little advantage over Drupal 8 (even still). Now, I still wouldn’t recommend brand new people start with Drupal 7, but I think those build scripts and performance tricks over the years have overshadowed a lot of the shiny stuff of Drupal 8. Why I bring this up is that we, as a community, need to figure out how to onboard those people that are holding back because of the build routines, otherwise they might leave for other spaces.

Cloudways: How much of a part do you think the concept of ‘Headless Drupal’ has to play in Drupal’s advancement?

I wrote a post recently on Drupal Planet about realizing Drupal’s destiny, which is all about Headless and progressively decoupled life cycles. I know, at least for the ELMS:LN team, this is where Drupal will fit going forward. We’ve got 12 or so Drupal distributions that talk to each other over REST and other backend web services. So we’re already set in place to express our platform as data and we’ve just started rolling out new “apps” in ELMS:LN as JSON endpoints talking to Polymer elements.

The future of all our development will be placing Polymer apps in the correct directory within our install profile, Web components module (which we engineered) noticing the app and creating routing/data pathways, and then setting an initial route as the homepage and letting polymer drive from there. We’ll use Drupal APIs to assemble the JSON blob to send from the endpoint and we’ll have our UX do the rest.

I don’t believe in pure headless though, especially not for any project that exists today without it. I do believe a lot in progressive decoupling and headless where it makes sense. Today we’re building polymer apps for slick UX, but we’re also using the web components module to hollow out tpl files and simplify our theme preprocessing hooks. I also believe that decoupling is the gateway to easing Drupal upgrade/migration paths off of 7 to 8; our long-term goal.

Cloudways: Ok now let’s talk about what you like to do in your free time (not work related). What are some of your favorite activities/hobbies?

ELMS:LN. Oh wait, you said not work… hmm.. I love spending time with my kids and my wife and connecting with them. It’s hard to do when you’re as passionate about what you do as I am (and having a license to open source) but I enjoy disconnecting entirely from screens a few times a year and going on trips to the woods or amusement parks. Multiple members of the ELMS:LN team are hockey fans too, both in playing hockey and watching. So as Penguins fans (2x Stanley Cup champions the last two years), we’ve had a lot to enjoy and celebrate outside of work successes.

Cloudways: Last question, have you ever had a chance to try out Cloudways? What are your thoughts about the service provided by Cloudways?

I haven’t yet, but it looks interesting. I’m always looking for places to deploy and try things out that don’t have the complexity of EC2 while still providing stability.