Dennis Dornon on MainWP: “The idea came from a need to update over a hundred WordPress sites” 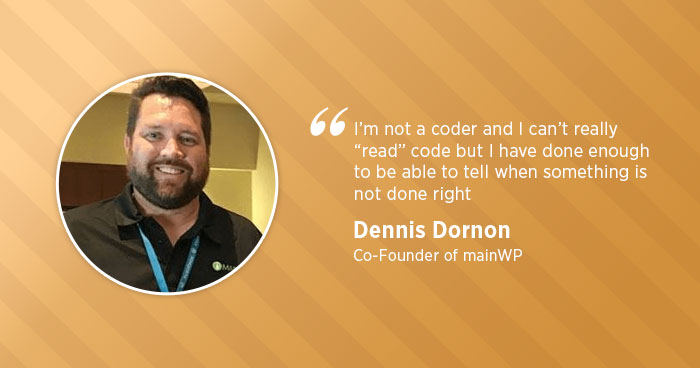 Managing multiple WordPress sites individually is a lot of work and not a very efficient way of doing the job.

I got the opportunity to interview him in which I tried to know the story behind developing a WordPress plugin and how does he cope up with challenges as one of the Co-Founders of MainWP.

Why should you run your MainWP dashboard site on Vultr using Cloudways?

Cloudways: Today, we are glad to take the interview of Dennis Dornon, co-founder of MainWP. Let’s start by hearing your story before MainWP. Did you really want to be what you are today? What other options you had in mind when you were starting your career?

Dennis: Before MainWP plugin, I was pretty much all over the place from working at ATT Wireless, Sprint Cellular, being a busboy, and even a car salesman (and not a very good one).

While I was working as a salesman I started a car dealership review website that I was later able to sell and transition full time into affiliate marketing.

I later became close friends with Chris Mitchell, another affiliate marketer and the co-founder of MainWP, and we saw a niche where affiliates needed a low-cost solution to maintain hundreds of sites in order to maintain profit margins.

Cloudways: Well, that’s interesting!  In your personal website, you have stated that you are not a coder nor a designer. Is this by choice or you did try and find out that it is not your cup of tea? Any (behind the scene) interesting story you would like to share with us?

Dennis: I did try briefly to become a coder and learned some ColdFusion. ColdFusion (CF) was my language of choice since ATT Wireless was running it on their internal servers.

At the time I was learning this I was also a trainer for new customer service representatives and with each little change, we had to re-do this paper manual that was hundreds of pages long and has it sent off to Kinkos (now FedEx Office) to have them printed. We would then discard all the old copies and distribute the new ones.

I developed the first online training manual for ATT Wireless call centers and won their Circle of Excellence award and a free trip to Hawaii, so yeah!!

However, after my time at ATT, I decided CF wasn’t really the language I wanted to learn so I dabbled in PHP for a bit before discovering that it was easier to hire someone who already knew it then to learn it myself.

Now, I forget where this came from so if it’s your quote all credit to you, but it basically boils down to if it will cost less than $20 for a coder to figure out the problem hire them to do it and move on to another task.

Cloudways: Well, that is a smart strategy. When and how did you discover WordPress? Who was your early influence to enter the internet business world? Do you have any prior experience of running an online business?

Dennis: I can’t say really when I discovered WordPress, I think it just became the easiest thing to use back when I was an affiliate marketer. I don’t remember any particular early influencers, I had just learned some basic coding while at ATT and knew I wanted to figure out how to make money from it.

Cloudways: What inspired you to step into the WordPress plugin development? And how the idea of creating MainWP plugin came into your mind? What aspects you think should be covered by any plugin to be the best for its users?

Dennis: I’m not sure you could even classify me as a true WordPress developer since I’m not a coder and everything we have built as a team has centered around one product, MainWP.

The idea came from a need to update over a hundred WordPress sites while keeping everything private at the time the two major players either were using the SaaS model or using obfuscated code.

Cloudways: That make sense. You are not a coder yourself. How do you manage the technical and design team behind MainWP? What tools and resources do you use to assist you in your day to day tasks? What’s your motivation to face the challenges?

Dennis: I’m not a coder and I can’t really “read” code but I have done enough to be able to tell when something is not done right.

When your in my position you have to be quick to fire, and I know it sounds harsh, but if you smell something is not right cut ties and move on to the next coder who you are more comfortable with.

When MainWP started I already had a handful of coders and had built up an internal team the same as Chris. We both had our own teams working with our affiliate businesses so we didn’t need to hire from scratch and we were able to blend in our best coders and designers.

Even to this day before you work on anything MainWP, you have to do multiple other projects that are not related to MainWP before you are allowed to interact with the core team, let alone the core code.

Cloudways: It is great how you manage to keep the quality of the core code.  There are alternate plugins available to serve the purpose of managing multiple WordPress sites. Which factors set apart MainWP from those plugins and what is that one feature your team gets complimented for the most?

Dennis: The biggest thing would be that is Open Source and all the code is available for review either directly in Github or from WordPress.org and the fact the Dashboard is self-installed (meaning you install it on your own WordPress site).

Most other plugins of this type use the SaaS model or obfuscated code and that is the part I have never been able to wrap my head around and maybe it’s because I come from the affiliate side of things where you keep your money making sites and techniques a secret. I just don’t see how people just install all their client sites and information where other people/companies have access to all that information. Especially as much detail that can be gleaned from a Management Dashboard. It’s insane to me.

I know some people say I’m paranoid and maybe I am so I won’t get too much into here but if you want to know more on my thoughts here, please check Never SaaS.

Cloudways:Thank you for sharing the link. MainWP is undoubtedly among the best WordPress plugins and can manage multiple WordPress sites through a single dashboard. How do you manage to keep it so efficient?

Dennis: It really helps to have people you trust and I have to give credit every day to our three major customer-facing team members; Bogdan, Sanja, and Thang.

Those three have been with us since the beginning of MainWP and almost everything runs through them before it is ever seen by the public.

Cloudways: Kudos to your customer-facing team. How do you think WordCamps contribute to the WordPress community? What are some local WordPress meetups you like? Have you ever attended any WordCamp?

Dennis: We use to sponsor WordCamps, our first one was in 2014 and our last one was sadly in 2016, and they were a good time and you could learn a bunch but for the cost, we really just didn’t feel the return was worth it to continue sponsoring.

Todd did a great write up a few months back “There are much more than 7 reasons to attend WordCamp”.

Cloudways: As you are aware that WordPress 5.0 is already out. What are your thoughts about Gutenberg Editor being added to the Core? And what kind of reaction did you observe in the WordPress Community after its official launch?

Dennis: We are strictly in wait and see mode right now, and have kept the classic editor in MainWP Dashboard until changes settle down. Once that seems more stable on the .org end of things we’ll reevaluate our position. We have a blog post on it.

Cloudways: What are some of your favorite WordPress blogs /publications /newsletters / podcasts /web shows?

Dennis: Going back I would say the WickedFire forum for affiliate information (pretty dead now), Chris Lema’s blog for some overall good reading and, SearchEngineLand or SearchEngineJournal for learning SEO.

Currently, I just use Facebook groups to find interesting topics to read when I have time. I know, I know a privacy guy using Facebook! Sometimes you need to go where your customers are and where they are talking.

Cloudways: You have been in the WordPress industry for quite some time. What are some people who have inspired you or helped you to excel in the WordPress world? Can you name any five of them?

Dennis: I honestly could not name 5 since I don’t think you simply can limit your thought process to just 5-10 people like that.

Sometimes I get inspiration from the most mundane to insane places and from the simplest questions in the Facebook group to a well thought long-form blog post.

If I had to recommend one thing to new people trying to learn WordPress is to be wary of what I’ll call “WordPress Personalities”. The best way I can describe them is to paraphrase a saying I’ve heard a few times as a parent; “Your parents were just trying to figure out stuff the same as you are now.”

What I’m trying to say is the majority of these “WordPress Personalities” are just like you and me trying to figure things out. They just put it in a blog post with an authoritative tone and make claims without any backing. Anyone that claims to have all the answers you need to be wary of and don’t give them the click.