Interview With the WordPress Veteran, Bob Dunn aka Bob WP 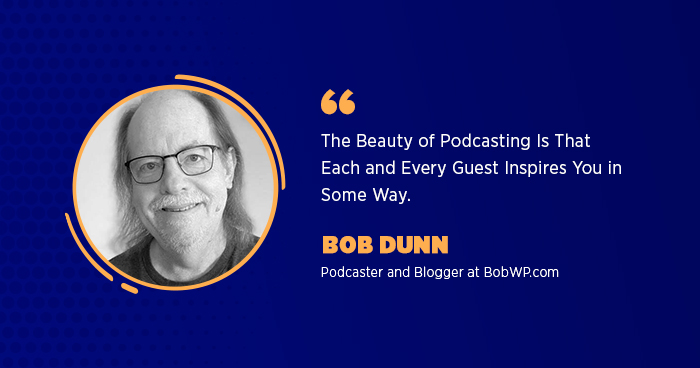 Bob Dunn aka “BobWP” is not just a WordPress trainer; he is the Grandmaster. He knows WordPress inside out.

Since 2008, he has trained hundreds of people in different aspects of WordPress. Thanks to him, WordPress has become accessible to many. His style of putting it in a “non-geeky” manner has won him great respect and recognition across the WordPress industry. Bob’s latest tutorials can be accessed at BobWP, covering WordPress basics, plugins, widgets, Genesis framework, and themes.

Cloudways: It’s been a great opportunity to interview one of the known WordPress veterans, Bob Dunn aka BobWP. Thank you so much for taking out time for this! Could you please tell our readers about yourself? How’s your WordPress journey so far?

Yeah, currently I label myself as a podcaster and publisher specializing in WooCommerce. I just recently celebrated 10 years of the BobWP brand and started using WordPress in 2007. Having run a marketing business prior to that for 17 years, my WordPress journey has been very diverse. I think I’ve done about everything you can with WordPress except development. But I would say my overall theme has always been educating and helping people.

Wow, now I really have to reach back. I just fell into that as it was a time when graphic design was also considered desktop publishing. I started dabbling in it and was completely self-taught. I believe everything I learned from working with a diverse group of clients helped us grow into our marketing company. That was probably the biggest turning point back then.

Cloudways: You also launched Cat’s Eye Marketing, a print design firm in 1993 for small businesses and nonprofits organizations. How was your experience there? Could you please tell us some of the projects that you’re proud of?

We did a lot of work for nonprofits and education. Specifically, it’s hard to think of certain projects, but serving that space was especially rewarding. Also, a lot of the projects we did when we were in a suburb south of Seattle for 10 years really built our reputation in the community. From work with the hospital there to a lot of event materials for the city itself. This led up to the very proud moment where we would win the Business Citizen of the Year in the local chamber of commerce. Heck, we even beat IKEA out that year.

Cloudways: There was something noticeable in 2003 in the world of CMSs. I assume that you already know what I’m talking about. 😉 — WordPress. You discovered it in 2007 and moved your services to it. What are the key features you really like about WordPress?

I guess it’s not so much a feature as to how it has continued to grow. I am a big fan of Gutenberg for sure. And if I was to say what one specific feature that I have used over and over and feel is one of the most powerful features, it is simply categories or taxonomies. It’s amazing what you can do with them. Especially with our strength in content over the years.

Cloudways: WordPress has changed the way of building an online presence. What do you think are the strengths and weaknesses of WordPress? Would you like you to recommend a few themes and plugins that you think are useful for WordPress users?

This is one question I seldom address and it really depends on who you are, what you do and a thousand other variables. With the growth and changes, what you view as either a strength or weakness can suddenly take a turn.

As far as plugins and themes, with the number of them I have used in the past 13 years, well, it’s hard to name some without the frustration of saying, shoot, I didn’t include xxxxxx. I go back to that concept of how our needs change over the years, thus our plugins and themes do the same. I used the Genesis framework for several years myself as well as clients when I was doing design, and am now using Beaver Builder personally. I would say that the three plugins that have had the longest life on my sites are Gravity Forms, WooCommerce and Yoast SEO.

Cloudways: Team Cloudways was really happy to meet you at the WordCamp US, 2019. Could you please share some of the best encounters/memories while attending that? What do you say about the role of WordCamps for community building?

It was great meeting the Cloudways team as well.

I love WordCamps. I don’t get to as many as I used to, but there is no better way to build community and relationships. I will admit I got to them to see people and talk to people. I hardly ever attend sessions. I know, shame on me.

There are so many memories that I have. Lots of laughter and hugs. Great conversations.

Ahsan Parwez (Cloudways) with Bob Dunn at WordCamp US, 2019

But the memories I hang on to the most is connecting with my readers. The reason being is as content creators we never know who the majority of people who read our content are. But when someone walks up to you and says they have been reading your stuff for 5, 6 or 7 years, or more, it just reaffirms what you are doing for the community. I know that sounds a bit selfish, but I never tire of meeting my new or long-time readers. It’s a connection you get to finally make in person.

Cloudways: You’re also educating the WordPress Community through podcasting. You started BobWP in 2010, it’s probably one of the oldest podcasts in the WordPress realm. Who are some of the guests that really inspired you?

Yeah, I didn’t start podcasting till 2014 and have to admit that I have done several of them. Probably to the oldest podcast in the space, but I certainly have been around for a bit.

Each guest is always a joy to talk to and you will get inspired in so many ways. The few store owners I have had the pleasure of talking to always inspire me simply for what they have done with WordPress and ecommerce. And some of them have done more than just starting a store. Many have brought help to others through their efforts.

As with so many things, it’s hard to list specific guests for the very reasons I just shared. I think the beauty of podcasting is that each and every guest inspires you in some way, whether it’s big or small.

Cloudways: The large segment of the web hosting industry revolves around WordPress as it’s one of the most-used CMS on the Internet. What type of hosting do you think is the best for WordPress users? What are your thoughts on managed WordPress hosting?

Oh, that is a hot button. LOL Hosting is one of those things that I don’t talk about along with sex and politics. But seriously, I am a big fan of managed WordPress hosting.. I will typically recommend that. As far as who and why that is a rabbit hole.

I don’t get people asking me for recommendations as much as I used to when I was training, designing, etc. But when I did, it went something like this.

What are your needs? If they didn’t have a hosting company in mind, well we would talk this out and I would probably end up recommending them from a handful of hosts I trusted.

If they were leaning towards an existing host, two things would happen. Either I would say, ha, no way (there were very few hosts that I would say that about). Or I would say, they may be a good solution for you. And I believe their services could fit your needs. Go for it. If you need to find someone else down the road, well, you can do that.

Cloudways: Our readers would be happy to see your workstation. Could you please share an image with us? Thanks once again for this interview, Bob. 🙂

Ahsan is the Community Team Manager at Cloudways. He loves to solve problems and help Cloudways' clients in any aspect he can. In his free time, you can find him playing RTS PC games.