“Everyone using Drupal should consider contributing,” Iztok Smolic Shares His Passion For Drupal 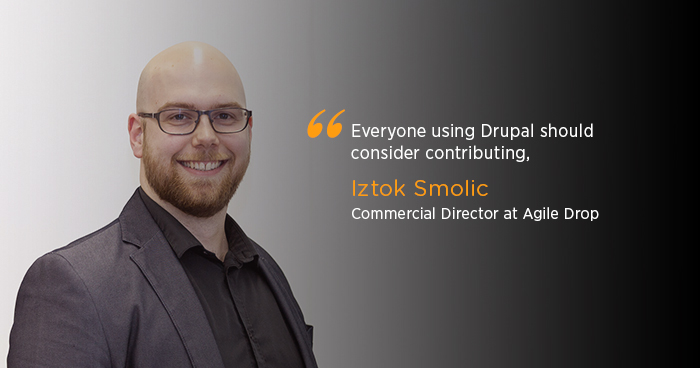 Iztok Smolic is the Commercial Director at AGILEDROP, web development company focused on enabling digital agencies to scale their Drupal capacities. Today we sit down and have a chat with Iztok revolving around Drupal.

Cloudways: Hello Iztok, how are you today? Please tell us a little about yourself.

I live and work in Ljubljana, Slovenia. I am the co-founder and Commercial Director at AGILEDROP. AGILEDROP helps digital agencies deliver Drupal websites. By providing Drupal developers, we can immediately increase their web development capacities.

Cloudways: How did you first come across Drupal? What was it about Drupal that made you stick with it?

I first met Drupal in 2007 when I was helping a friend with a web design. At that time, I was doing graphic designing and some web designing, but I was curious about web development too. I soon realized Drupal was enabling me to build everything without having to write too much code myself.

Cloudways: One question we usually ask everyone is: Why Drupal?

It is a very sophisticated platform also you can build a lot without having to write a code. The open source community behind Drupal is just amazing and welcoming.

Cloudways: Do you expect Drupal to pose a serious challenge to WordPress and other top-tier CMS?

WordPress is not a top-tier CMS. When you say top-tier, systems like Sitecore and Adobe Experience Manager come to my mind. Can Drupal compete with them? Yes, it does.

Cloudways: What advice would you give to people just starting out with Drupal?

Don’t give up and don’t look for new and shiny objects. Drupal is a stable platform that will become more and more powerful, so invest in proper training. Look for mentors and work at companies that invest in their people. At AGILEDROP we have free workshops for beginners and it’s always a good feeling when a new batch of Drupal developers get our certificate.

Improve Your Drupal App Speed by 300%

Cloudways: How do you think Drupal has evolved over the years?

It’s moving from consumer CMS market (think WordPress) to enterprise market (think Adobe Experience Manager). In my opinion, this is the right way to go, since the lower end CMS market is moving to the cloud (eg Squarespace).

Cloudways: You’ve been an active Drupal events attendee. What would you say about the importance of such events? How important do you think it is to be involved in the community?

Drupal Camp and DrupalCons are important for Drupal community. My first interaction with other Drupal developers was at a DrupalCon. If there were no such event, there would be fewer developers and Drupal would not be so powerful.

Cloudways: Do you think Drupal developers should contribute to Open Source projects? What projects would you recommend to developers?

Everyone using Drupal should consider contributing. My time to write codes is over now, but I try to help the Drupal community by encouraging to develop open source modules and writing patches at AGILEDROP. We also invest in organizing and sponsoring local events. Other people can contribute with their own skills and abilities too.

Cloudways: OK, enough talk about work. What do you like to do in your free time?

I have more free time for hobbies, now that the company has grown. I always liked to create, so my recent hobby is making things out of wood. This summer I renovated our garden shed and made furniture out of pallet wood.

Cloudways: Have you ever had a chance to try Cloudways? What do you think about it?

I truly like Cloudways. We are focused on building websites and web applications and having a service that takes care of the server setup means faster delivery. Personally, I have never liked messing around with command line so any interface between me and servers is very helpful.