“Getting Involved In Drupal Has Truly Changed My Career,” Bob Kepford Talks on Drupal 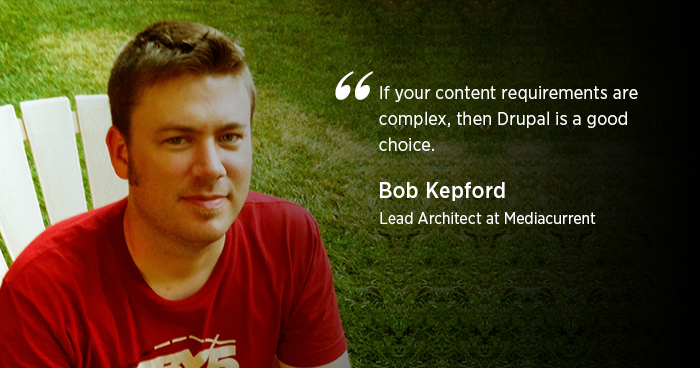 Cloudways interviews Bob Kepford, Lead Architect at Mediacurrent and the brilliant mind behind the weekly Drupal newsletter TheWeeklyDrop. Learn more about how TheWeeklyDrop came into existence and the inspiration behind it.

Cloudways: Hello Bob. Thank you for your time. Please tell us a bit about yourself?

I’m a web developer from California, Lead Drupal Architect for Mediacurrent, co-host of The Mediacurrent Dropcast and the creator of TheWeeklyDrop newsletter.

Cloudways: When did you start working with Drupal? What were your motivations and how has the journey been so far?

I started using Drupal back in the Drupal 5 days, about ten years ago. At the time, I was building a custom CMS and the more I looked at Drupal and it’s growing community, the more I realized that I needed to give it a try. Using Drupal and getting involved in Drupal has truly changed my career.

Cloudways: What major projects are you involved in right now?

I’m working with a couple of clients of Mediacurrent, some tools to help me manage TheWeeklyDrop and had the pleasure of helping organize the first annual Decoupled Dev Days conference in New York City.

Cloudways: What were some of the biggest challenges you’ve faced in your Drupal journey?

The biggest struggle I have had is self-doubt. I don’t struggle with this issue as much as I used to, but it is very easy to compare yourself to others and think that you don’t measure up.

Cloudways: What do you think of the WordPress vs Drupal vs Joomla debate? How do you rate the Big Three?

Honestly, I don’t think about this topic any longer. I’ve never used Joomla for a real project and haven’t touched WordPress in years. WordPress seems to be a great platform and seems to be more simple and easy to understand than Drupal. Drupal seems to be the more flexible CMS of the three, and really shines when you need to support complex user permissions and/or workflows. If your content requirements are complex, then Drupal is a good choice.

Cloudways: What prompted you to start TheWeeklyDrop? How has it been beneficial to you?

I saw a need for a Drupal-focused email newsletter. I modeled TheWeeklyDrop after JavaScriptWeekly.com, the great newsletter started by Peter Cooper. I also wanted to do something to contribute to the community. The response to it has far surpassed my expectations.

Cloudways: What advice would you give to newbies who are just starting out with Drupal?

Cloudways: Who are some of the most influential people in the world of Drupal you’d recommend Drupal newbies to follow?

Dries for sure. Damien McKenna who is a colleague and prolific contributor, Matt Davis another colleague and a person who is very active in the decoupled Drupal scene.

Cloudways: Alright, enough talk about work. Tell us about your hobbies? How do you spend your spare time?

I’m a musician and play several times a month at my church. Of late, I’ve been tinkering with Raspberry Pi’s and open source IoT software and hardware. I like to fix things as well as make things. So on most weekends, I’m working around the house doing those things.

Cloudways: Ok Bob. Last question. Have you ever had a chance to try out Cloudways? If so, how did you like it and would you recommend it to your peers?

I haven’t tried it, but I like the idea of being able to deploy to different VPS providers.